June 18, 2020
This is a dish that I often used to order at Din Tai Fung in LA. Along with their rightfully famous xiaolongbao. I had tried it a few times in China, but not with shrimp. 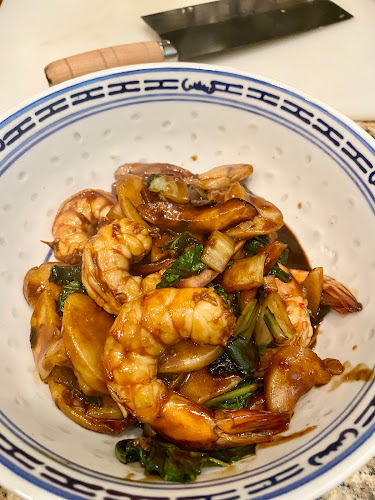 After tracking down the rice cakes (who knew there were so many types and shapes), it was a bit of a learning curve to figure our how to prep them for the wok.
I finally settled on boiling them in water with a splash of fish sauce. The big take away, was it only took about 2 minutes for them to cook and they were done when they floated. Additionally once you drain them and start stir frying everything else, they tend to stick together, but quickly release once they hit the wok.
Ingredients
3 Tbsp Vegetable oil
1 cup Shiitake Mushrooms, sliced
2 cups Bok Choy, hard ends removed and cubed and sliced
2 Green Onion, chopped into 1-2 inch pieces.
2 cloves Garlic, minced
2 cups Rice Cake, see note.
10-12 large raw Shrimp, cleaned and peeled, tails intact.
1 Tbsp Shaoxing Wine
Sauce Mixture:
2 Tbsp Light Soy Sauce
1 tsp Dark Soy Sauce
2 Tbsp Oyster Sauce
1 tsp Black Vinegar
1 tsp Sesame Oil
2 tsp Sugar
Heat pan with vegetable oil, add green onion, garlic, shiitake and bok choy and stir fry until they wilt.
Add rice cake and stir fry until the rice cakes are cooked through and flexible Add shrimp and stir fry until shrimp just curl. Add a splash of Shaohsing wine to deglaze the wok and then add your sauce mixture and stir fry until rice cakes are soft. Serve with steamed vegetables. 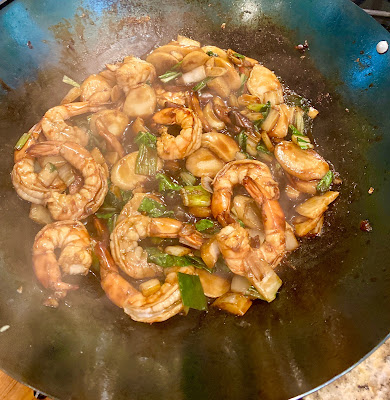 Note: If rice cakes are dried or vacuum packed, they will need soaking for three hours. For a faster method, cook for 2 minutes in boiling broth or until they float. Drain and reserve.