August 13, 2018
This is a variation on a traditional Turkish dish. I love the bold spices and the richness of the tomatoes in the savory sauce. It is not difficult to prepare, but does take a little bit of time, as you need to cook the eggplant prior to stuffing them. 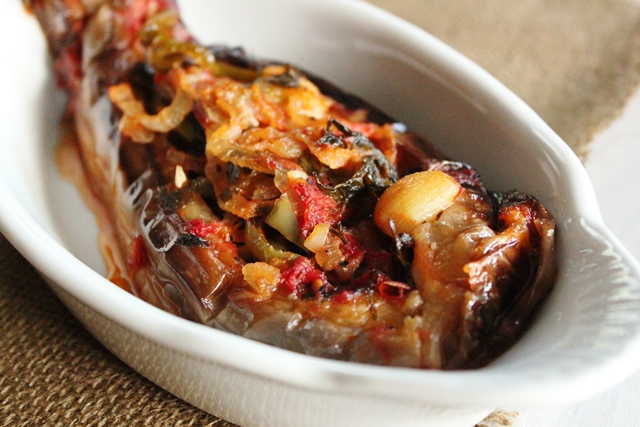 Preheat oven to 350F degrees. Slice the eggplant in half and scrape out about half of the flesh and set aside. Then brush the halves with olive oil and sprinkle with salt. Bake the eggplant halves for 20-25 minutes until just soft to touch, but not mushy.

While the eggplant is baking, start preparing your sauce by browning the Boca crumbles in 1 Tbsp of the olive oil and set aside. Then add in the remaining 1 Tbsp of olive oil to your pan and sauté the onions, chopped eggplant flesh and garlic until translucent, add in the browned Boca crumbles, tomatoes, all of the spices and pomegranate molasses and bring to a simmer and continue to cook until the mixture is thickened. This will take approx. 45 min -1 hour.

Bring the oven up to 350F degrees. Then assemble the eggplants by spooning in the Boca and tomato mixture into the eggplant halves, and then lay them in Pyrex or other oven proof baking pan and then spoon on the yogurt and finally sprinkle the pine nuts. Then bake for 15-20 minutes and serve.

This would be perfect with a spicy Rhone wine such as a Hermitage, Cote Rotie or an Oregon Pinot Noir.