August 26, 2016
Here's the back story. The Chicago Tribune was interviewing Harland Sander's nephew, and in a scrapbook he showed the reporter a hand written recipe for the original KFC. 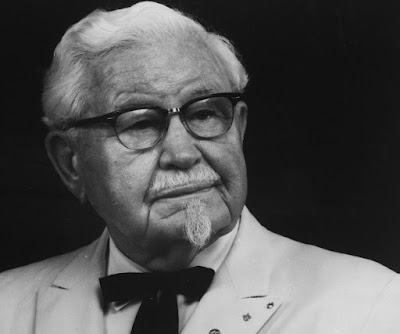 "The recipe came to us (Chicago Tribune) by way of Colonel Harland Sander's nephew, Joe Ledington of Kentucky. He says he found it in a scrapbook belonging to his late Aunt Claudia, Sanders' second wife. Ledington, 67, says he used to blend the spices that went into his uncle's world-famous fried chicken, and the recipe in question is the real deal."
So, here you go:
Ingredients
2 cups all-purpose flour
2/3 Tbsp Salt
1/2 Tbsp dried Thyme
1/2 Tbsp dried Basil
1/3 Tbsp dried Oregano
1 Tbsp Celery Salt
1 Tbsp ground Black Pepper
1 Tbsp dried Mustard
4 Tbsp Paprika
2 Tbsp Garlic Salt
1 Tbsp ground Ginger
3 Tbsp ground White Pepper
1 cup Buttermilk
1 Egg, beaten
1 Chicken, cut up, the breast pieces cut in half for more even frying
Expeller-pressed canola oil
1) Mix the flour in a bowl with all the herbs and spices; set aside.
2) Mix the buttermilk and egg together in a separate bowl until combined. Soak the chicken in the buttermilk mixture at room temperature, 20-30 minutes.
3) Remove chicken from the buttermilk, allowing excess to drip off. Dip the chicken pieces in the herb-spice-flour mixture to coat all sides, shaking off excess. Allow to sit on a rack over a baking sheet, 20 minutes.
4) Meanwhile, heat about 3 inches of the oil in a large Dutch oven (or similar heavy pot with high sides) over medium-high heat to 350 degrees. (Use a deep-frying thermometer to check the temperature.)
When temperature is reached, lower the heat to medium to maintain it at 350. Fry 3 or 4 pieces at a time, being careful not to crowd the pot. Fry until medium golden brown, turning once, 15-18 minutes.
Transfer chicken pieces to a baking sheet covered with paper towels. Allow the oil to return to temperature before adding more chicken. Repeat with remaining chicken.

Note: This would be very good with Portobello mushrooms.
A note on MSG: A number of readers have asked how much MSG to use in the recipe above. Although KFC has confirmed that its present-day recipe uses MSG, that ingredient was not part of the list of herbs and spices we received from the Colonel's nephew, so we didn't include MSG in the published recipe. But we did taste the fried chicken with a sprinkle of MSG. If you want to try the chicken with MSG, we suggest doing as we did: Sprinkle a little on the finished chicken pieces right before eating.

Add all ingredients to a small saucepan and cook on barest simmer for 1-2 hours. (This broad cooking time is due to the fact that some garlic has more moisture than others). You’ll want the cloves to be s…
2 comments
Read more