January 03, 2011
I first had this dish in Amsterdam at a small Dutch restaurant off one of the canals in the Jordaan. This is a quaint area of canals, old homes, wonderful shops and brown bars. 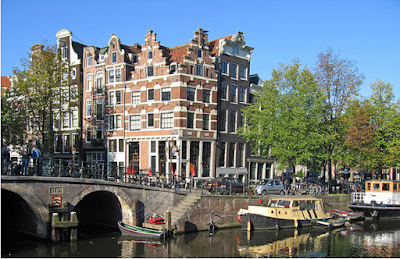 Kip in Dutch means chicken and grand mere is grandmother, so hence the name Grandmother's Chicken.

This is simple and really good on a cold blustery evening and is well matched when served with new potatoes, green beans and a cold Dutch beer.

Render down the bacon and then remove from the pan and set aside. Now add the onion and caramelize in the bacon fat. Add the chicken, salt and pepper and brown completely.

Transfer to 350 degree oven and bake until cooked through, then remove the chicken to a cutting board or plate and tent it with aluminum foil.

Now add the broth, bacon and mushrooms into the pan and cook until the mushrooms are tender and the sauce is reduced by half. Reduce the heat to a simmer, add the butter and whisk into the sauce.

Pour sauce over the chicken, sprinkle with parsley and serve with boiled new potatoes, vegetables and hearty bread.

The Louisville Chef said…
It is really good and perfect considering the chilly nights. I try to get a lightly smoked bacon or an applewood smoked rather than hickory smoked, which is a little strong. Also, if you can find boneless breast with the skin on, that is really good as well.
January 5, 2011 at 10:43 AM

Add all ingredients to a small saucepan and cook on barest simmer for 1-2 hours. (This broad cooking time is due to the fact that some garlic has more moisture than others). You’ll want the cloves to be s…
2 comments
Read more